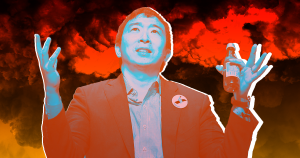 Long-shot U.S. presidential candidate Andrew Yang isn’t hopeful about the imminent future of humanity — that much become instantly clear in a bleak profile published today by The Verge.

Public enemy number one: automation, which Yang sees as a destructive result of a rapidly globalizing market-obsessed future. The risk is millions of jobs lost and a host of undesirable side effects like financial insecurity and a decline in mental health — a joyless, dystopian future in which humans have been replaced by the machines they built.

A Long Way Up

Yang’s core promise is to provide every U.S. citizen with $1,000 every month. That’d usually be called basic income. Lees verder