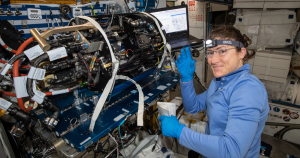 NASA astronaut Christina Koch joined the crew aboard the International Space Station in March, and on Wednesday, NASA announced plans to extend her space mission until February 2020.

Not only will the extension make Koch just the second astronaut to spend nearly a year in space and earn her the record for longest space stay by a woman — but the data from her trip could help humanity reach Mars.