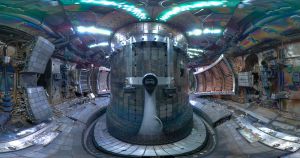 Nuclear fusion, the reaction that powers stars like our Sun, could be a source of nearly unlimited electricity. But before that can happen, scientists need to find a way to stabilize super-heated plasma in fusion reactions.

Now, researchers from Princeton University and the Department of Energy (DOE) think they’ve figured it out — and the technique could prove useful for an experimental European reactor scheduled to go online in 2025.

The work, described in a new paper published in the journal Physical Review Letters, deals with a type of structure in plasma that researchers call a “magnetic island.” Magnetic islands can cause Lees verder