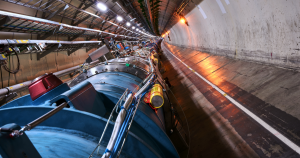 When the Large Hadron Collider (LHC) turns back on and starts smashing particles again sometime in 2021, it may also point us in the direction of dark matter.

For years, scientists have been trying and failing to spot the invisible stuff that makes up the majority of matter in the universe. But now researchers have a new target: a comparatively heavy and long-lived particle that may be produced by the high-energy collisions at the LHC.

The particle is thought by some physicists to occasionally interact with dark matter — giving scientists a new lead toward spotting the elusive material.